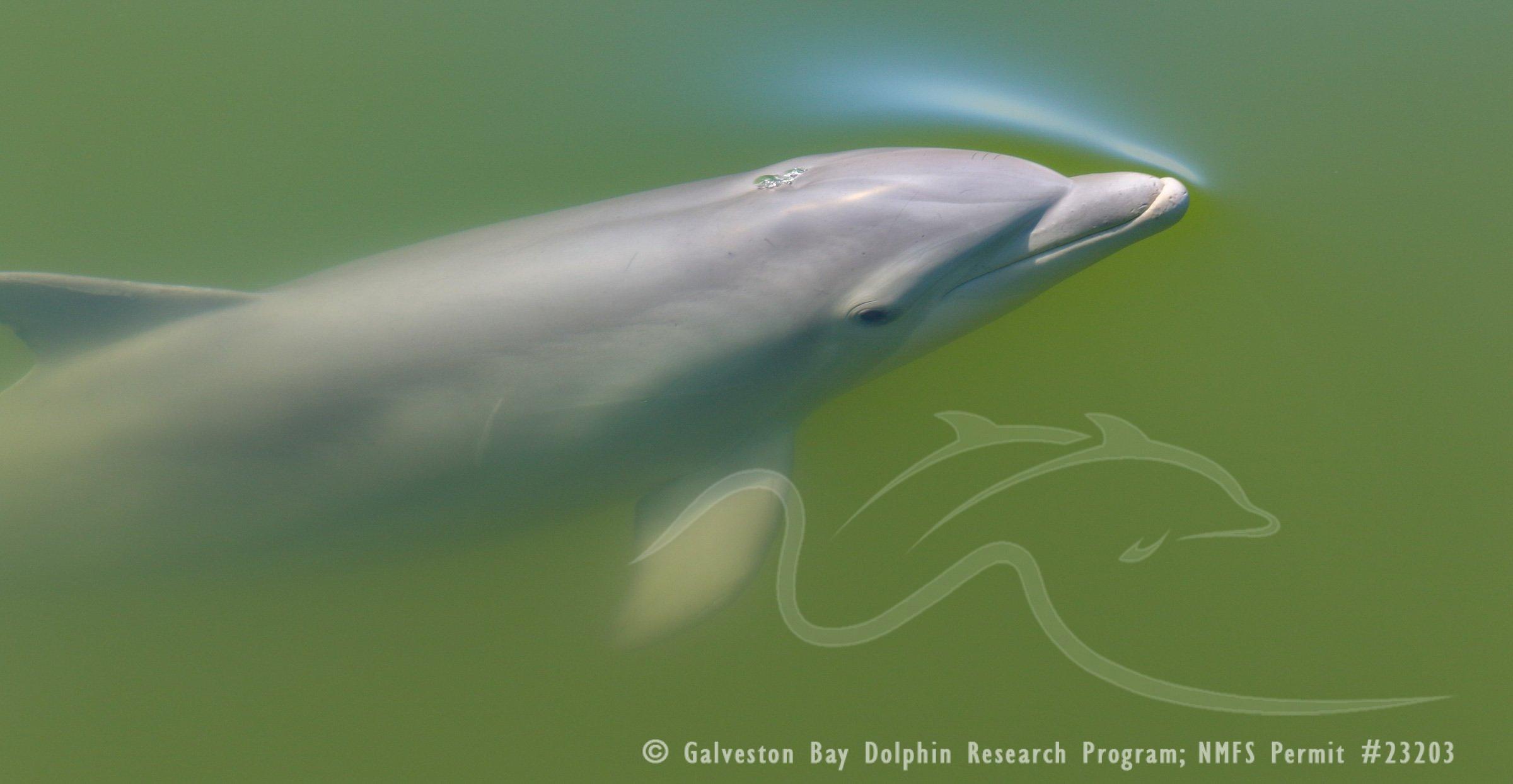 It was a windy quarter in Galveston Bay! Regardless, the research crew was able to complete three days of dolphin surveys during a calm, glassy week in February, and attained good coverage of both upper and lower Galveston Bay. The crew completed a total of 21hrs of observation covering 320 kilometers of linear effort. They sighted nearly 100 dolphins in 17 groups.

Furthermore, we recorded three opportunistic sightings in March (i.e., instances when we observe dolphins while we’re doing other activities in the Bay – not dolphin boat surveys). Although these data can’t be used in most of our strict analyses (because it’s not standardized), it can be useful to record dolphins in areas not frequently covered during surveys. These complementary observations from researchers can also provide information about behaviors and individual dolphins.

We’re expanding our study area! In our previous newsletter, we explained briefly that the GDRP is aiming to cover areas of lower Bay more consistently (as opposed to focusing only on upper Galveston Bay). Now, we are announcing more formally that we are changing our research/survey design to systematically include lower Galveston Bay. Our goal will be to survey both upper and lower Galveston Bay on a quarterly basis (4-5 days of field work per quarter).

After eight years of focusing on upper Galveston Bay, we know that dolphins use upper Galveston Bay year-round; however, many visit seasonally (during the warmer months only). As you can see in the sightings map above, there were many more dolphins in lower Bay this cold quarter than in upper Bay (despite the boat crew conducting surveys in both areas). By expanding our study area to lower Bay, we aim to determine if some upper Bay seasonal residents spend the winter in lower Bay. Overall, this change in spatial coverage will lead us to better understand dolphin movement patterns within the estuary, and it may help us to keep track of individual dolphins that we don’t see year-round in upper Bay. We also hope to collaborate with other Texas dolphin research groups to study larger-scale movements, including movement between estuaries.

If you spend time boating or fishing in Galveston Bay, you already know that days when the water is clear are few and far between! We hope that you enjoy these rare photos from an unusual survey day in February when the water was not murky, and researchers were able to see dolphins’ bodies underneath the surface. These observations may reveal scars and behaviors that are difficult to document above the surface of the water.

You may already be familiar with the freshwater skin lesions that we often find on upper Galveston Bay dolphins. We studied these lesions after Hurricane Harvey, and they are the focus of ongoing investigations. However, this quarter we want to highlight a different type of skin anomaly that we observed on Nancy (#61). This condition, referred to as skin film, is caused by diatoms (aquatic unicellular microalgae).The film usually consists of slimy yellowish or brownish patches. Previous studies have identified a correlation between skin film and water temperature, with more skin film occurring at cooler temperatures. Observations in Galveston Bay are consistent with these findings, as a Texas A&M study in the Galveston Ship Channel recorded skin film primarily in the cold month of February. Although much more research is needed on skin film, it does not appear to be directly harmful to dolphins, but it may be an indicator of compromised health. Consequently, we will be tracking its prevalence among our cataloged dolphins. The Atlas of Skin Diseases of Small Cetaceans is a great source if you want to learn more about skin film or other skin disorders in dolphins.

Another dolphin that caught our attention this quarter was a chubby dolphin that appears to be a very pregnant female! Unfortunately, we can’t be certain of her pregnancy status from our boat-based observations alone. However, her relatively large belly and the time of year are clues that she may be expecting soon.

Our uncertainty regarding this female leads us to share our interest in a recent study from Scotland, where dolphin researchers used unoccupied aerial systems (a.k.a. drones) to identify if dolphins were pregnant. Using photogrammetry, they measured the body width of 15 females, and the technique correctly identified the pregnancy status for all but one dolphin. Although the murky waters of Galveston Bay may make it challenging to apply this technology locally (because a drone may not be able to capture full body photos), we are hoping to evaluate the use of drones in the coming years. In the meantime, we hope to sight this dolphin again soon and perhaps confirm our hunch and meet her new calf!

GDRP principal investigators Kristi Fazioli and Vanessa Mintzer were excited to participate in two collaborative scientific workshops focused on Galveston Bay dolphins. In February, they attended a virtual workshop entitled NOAA’s Greater Houston Area Bottlenose Dolphin Data Gaps. This workshop was hosted and organized by NOAA’s Assessment and Restoration Division, NMFS Office of Protected Resources and the Southeast Regional Office’s Protected Resources Division, and the Coastal Response Research Center at the University of New Hampshire. Then, last week, Kristi and Vanessa participated in a second workshop focused on assessing the cumulative effects of multiple stressors on dolphins. The workshop team (pictured above) had a productive and enjoyable time at the Texas Corinthian Yacht Club (that generously donated their meeting space). The National Marine Mammal Foundation and NOAA’s RESTORE Science Program hosted the second workshop. We were thrilled to discuss our research and the conservation needs of dolphins in Galveston Bay with this diverse team of scientists and natural resource managers! 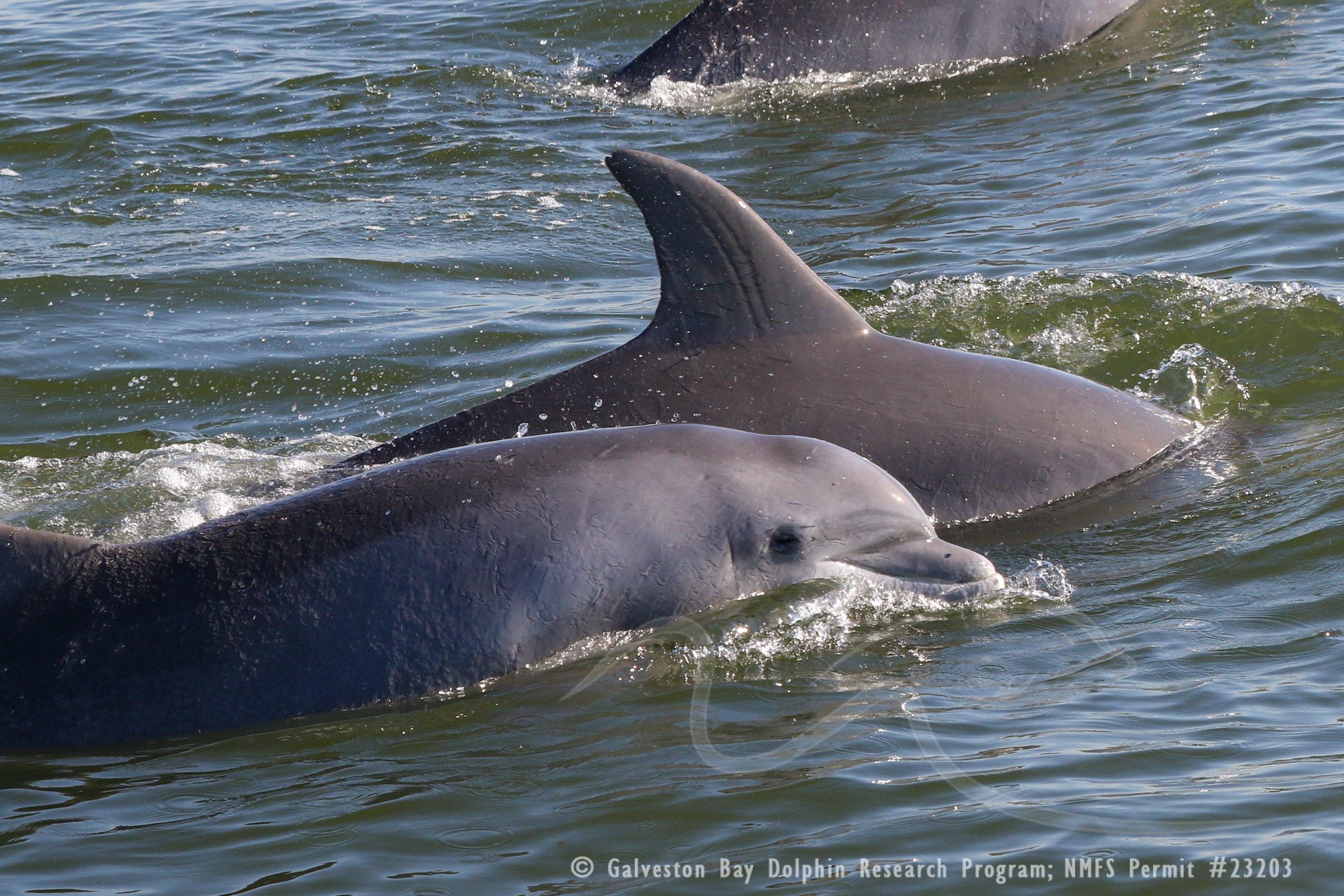 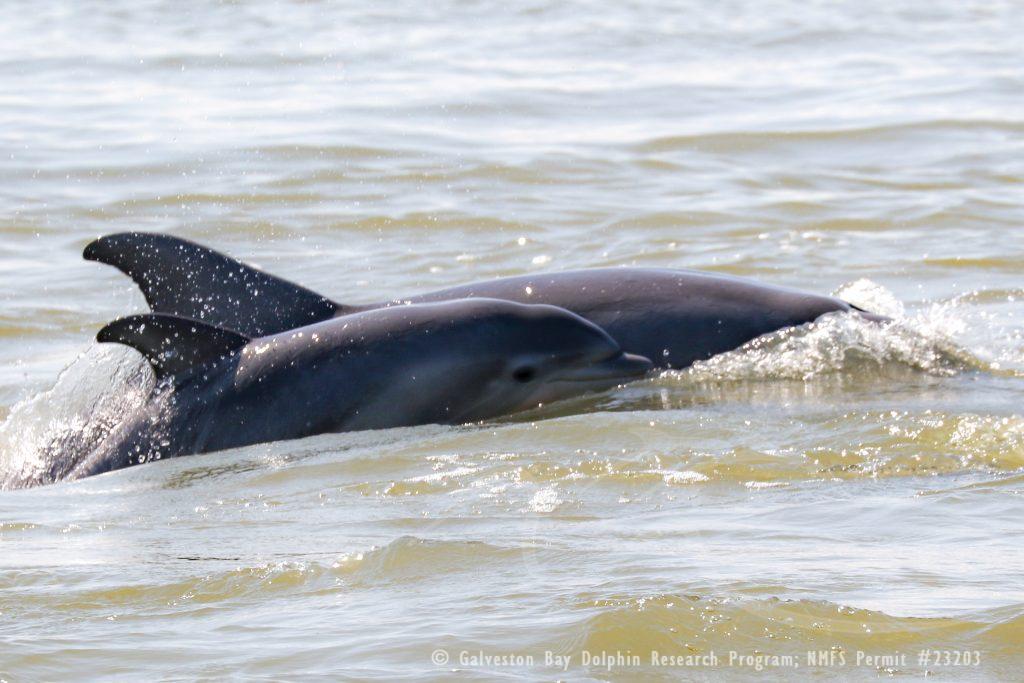 Three of our dolphin moms are available for adoption as Mother’s Day gifts: Angelique, Cruiser, and Sheba. And Dolphin #66 is available for naming! Gift adoption kits are delivered electronically and include photographs, a sighting map, and membership in our Dolphin Society. Please spread the word and help support our dolphin research with this unique Mother’s Day gift!

“How long do dolphins live?”

Bottlenose dolphins can live up to their 60s in the wild. The oldest known wild dolphin was named Nicklo, a dolphin residing in Sarasota Bay, Florida. She was presumed dead at the age of 67.

A reliable method to age a dolphin relies on their teeth. Dolphin teeth grow throughout their lives by producing new layers in the root. Similar to the rings of a tree bark, the layers are distinct for each year, and thus scientists can determine the age of a dolphin by cutting a tooth in half and counting the layers. Additionally, marine mammal health professionals can broadly estimate a dolphin’s age class using physical clues. One of these clues is how worn down their teeth are, since they will wear down through time. Through a generous collaboration with the Texas Marine Mammal Stranding Network, we are sometimes able to get important life history data on stranded dolphins in Galveston Bay. For example, #678, who is pictured below and was sighted regularly by the GDRP from 2016-2018, was reported as being an “older female” upon stranding in 2018. We do not know the ages of dolphins currently living in Galveston Bay, but we are hoping to soon apply a novel approach using epigenetics to determine the age of some of our cataloged dolphins from small skin tissue samples. Knowing the ages of individuals will help answer many important questions about the population!

The GDRP will host a booth at this year’s Bay Day Festival that will take place at the Kemah Boardwalk from 11am-4pm on May 14th. Join us to learn more about Galveston Bay dolphins and participate in all the fun activities that Bay Day offers! 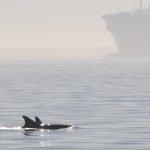 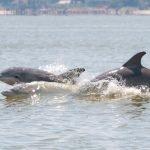 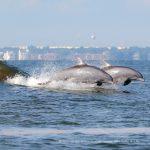 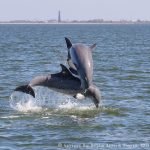